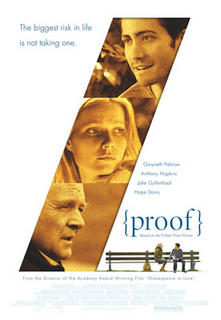 As we left the movie theatre last night, I turned to the bf and said, "So, what did you think?" "It was a great play," he replied, "and a very good movie." We were referring to Proof, the new film by director John Madden, based on David Auburn's Pulitzer-winning play. I'd pretty much agree. This tale of mathematics and madness is very compelling, anchored by a set of blazing performances. As the family's patriarch, a brilliantly groundbreaking mathematician who's slipped across the line of demarcation labelled "crazy," Anthony Hopkins gives a very, very good performance (frankly, when doesn't he these days?). It's easy to take Hope Davis for granted, and she does in fact give a "typical" Hope Davis performance, but she's so good as the "responsible" older sister, so capable of conferring a wealth of emotion with just a glance, a turn. Jake Gyllenhaal delivers in spades as one of Hopkins' Ph.D. candidates who develops a relationship with Hopkins' daughter, played like you've never seen Gwenyth Paltrow before. Paltrow is indisputable the film's star, the film's center, and she owns it, giving by far the finest performance of her career as Katie, who may be a chip off the old block in ways good (is she also a brilliant mathematician?) and not so (is she also losing her mind?). Hers is a piece of gorgeous, mannered work, some of the finest acting I've seen onscreen in 2005. The film's not perfect; it's too stagey, certainly, and hemmed in by that, and there were points at which Madden's direction nearly interrupted the flow of the film, but with words this gorgeous it would take some serious effort to get less than a good picture out of them. This is definitely a good picture, and one you should definitely see. Paltrow deserves her second Oscar nod for her work here, and Gyllenhaal gives notice that this could be his autumn, with two more films on the way (Jarhead and the atom bomb, Brokeback Mountain). Proof is a very fine piece of work.