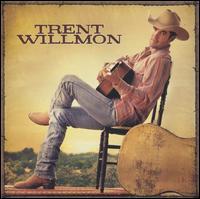 Would anyone care to explain to me why Trent Willmon isn't a rising star with a top 10 (country) hit or two under his belt, a gold-or-something-close-to-it debut album, and a CMA Horizon Award nomination? Instead, since his self-titled debut album was released one year ago this week, he's no longer listed on Sony Nashville's "Artists" page (the website launched for his album is still up, but hasn't been updated since early '05), his biggest impact on the singles chart was the #30 peak of "Beer Man" (three subsequent singles peaked at #36, #49, and #38), and he's not been nominated for a damned thing. This is a crying shame, because his album is one of the best Nashville's served up in the past 12 months.

Willmon, a good-looking guy just this side of 30 from the Texas hill country, wrote or co-wrote 8 of the 11 good 'n' solid songs on his debut, two of 'em with fellow rookie artist Bobby Pinson. First single "Beer Man" stated its case simply, and might've done better a year later, in the wake of the 2005 successes of Keith Anderson, Jason Aldean, et.al. (it's got that vibe, too). Its followup, the marvelously ridiculously titled (deep breath) "Dixie Rose Deluxe's Honky Tonk, Feed Store, Gun Shop, Used Car, Beer, Bait, BBQ, Barber Shop, Laundromat," is lots better, a single which had I heard it before the close of '04 (I probably first saw its video in January of this year on CMT) would've likely ended up in my top 10 singles of the year. It rollicks and rolls as Willmon spins his tale of Dixie's daughter Becky Jo, the prettiest girl in town (its video, along with two others of Willmon's, can be seen here). "Home Sweet Holiday Inn" is a sweet, sad song of divorce which Willmon co-wrote for his 6-year-old daughter, while "Population 81" is further proof he's as comfortable with balladry as with uptempo country (one guess what the population of the song's town used to be). This is no buffed-and-polished country album, either; Willmon's got a twang and a grit to him which you can hear on nearly every song here.

If there's any justice - and in Nashville, there usually isn't, but a guy can hope - someone, if not Sony Nashville, will give Willmon a second chance (it can't hurt that he's signed to a publishing company co-owned by Brad Paisley, who knows a thing or two about talent). He certainly deserves it; Trent Willmon's an artist who with the right promo TLC could really blossom into a career guy.