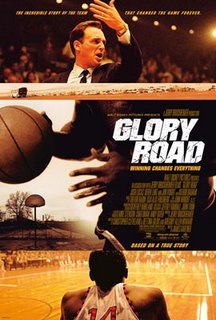 Simply put, it's a good sports movie. The basketball scenes are very well done and ring true, while the rest of it is basically what you'd expect from a Disney/Bruckheimer sports flick: struggles, uplift, family man beating the odds with his scrappy team, clichés. Oh, and a national championship game that Pat Riley (who played in it) calls "the Emancipation Proclamation of 1966," because it essentially was - Texas Western (now UTEP) beat Adolph Rupp's lily-white Kentucky team by starting five black players and in the process changed college hoops forever. Don Haskins deserves to be in the Basketball Hall of Fame, and while Glory Road may be imperfect, I'm glad a film was made about him and his '65-66 Miners. If you're inclined towards this kind of movie, you'll enjoy it thoroughly, and you should take the time to see it on the big screen. I'll definitely pick this one up on DVD in a few months' time - you know there'll be some good bonus features on Haskins et.al. And did I mention how ridiculously hot Josh Lucas is, in his short-sleeved dress shirts? B