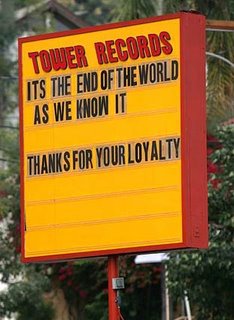 My first encounter with Tower Records was 11 years ago, in the heart of Manhattan for CMJ Music Marathon. I had an escort of sorts, a gay pal who worked for a promo company (I've regrettably forgotten both his name and the name of the company he worked for), who excitedly took me to Tower - I think it was the Lincoln Center location, since CMJ was taking place right there - and helped me pick my jaw off the floor after walking inside. There was just so much there - certainly more than I'd ever seen in any Indiana record emporium. I was truly and honestly blown away by the catalog offerings, by the sheer size of the store. I remember picking up some import Moby singles (he was going to be on a dance panel I was attending later that day - and, in fact, I got his autograph on at least one of those singles ["Everytime You Touch Me," I believe]) and not much else; I was too overwhelmed.

I didn't walk into another Tower until 2004, when I moved to Los Angeles. (My former states of residence - IN, VA, and NH - have 0 Towers between them.) The BF re-introduced me to the jows of Tower's deep catalog - sure, you can find nearly anything online these days, but that doesn't beat the thrill, the joys of thumbing through the racks, of discovering titles you didn't know had come out already, or that came back into print, or that you'd just forgotten about. We generally went to the Pasadena store (near home) about once a week to pick up new releases and see what else was there, depending on our budget.

And now it's nearly gone. The GOOB sale continues - last night I picked up the new Steve Reich boxed set at 15% off, and Barry White's Ultimate Collection -20% - and we'll keep going as the discounts mount, but with heavy hearts. Yes, in L.A. there's still the indie monlith Amoeba (quite possibly the world's greatest record store), but their new-release prices aren't so great. There's Virgin, too, but I prefer Tower, always have. Tower seems to have a more personal touch; Virgin's more a chain chain, whereas each Tower has a different flavor to me. Record-shopping won't be the same without Tower around, and that's sad. (Oh, and the biggest culprit here? The record labels, who insist on continually raising, not lowering, their prices and being generally hateful to consumers. Thanks a lot, guys.) At least it does look like tower.com will live on.