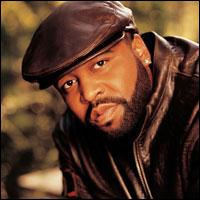 LEVERT PASSES: R&B singer Gerald Levert died today after suffering a fatal heart attack at the age of 40. Levert, also known as "G-Bear" to his fans, is featured on Styles P's upcoming album Time Is Money. The soul star was working on a reality show that featured him losing weight along with 12 of his female fans, who lived and trained with Levert for 30 days. Gerald Levert's father Eddie is the lead singer of the O'Jays. Levert scored pop success as a member of the R&B group LeVert and as a member of LSG with Keith Sweat and Johnny Gill. He later hit big with singles like "Casanova," "Pop, Pop, Pop, Pop (Goes My Mind)," "Mr. Too Damn Good to You" and others.

Give a spin to LeVert's "Pop, Pop, Pop, Pop" (which I dearly love) or "Casanova" (ditto, both available on their solid Best of), or G's "Private Line" (the title cut from his 1991 solo debut - remarkably, and sadly, there's yet to be a compilation of his solo work), and raise a glass of something smooth in his honor. One of the great soul voices of the '80s and '90s will be sorely missed. R.I.P., Gerald.

(Cross-posted at Back and Forth.)