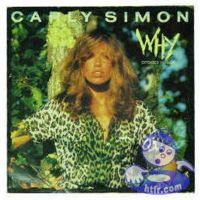 You want to know why Carly Simon's "Why" - which you might not even know of, let alone remember, unless you're the brill Marcello, largely 'cause it didn't even hit the U.S. top 40 (though it slipped its way up to #10 in the U.K.) - is so fucking astonishing, her best single ever (not that that takes so much doing, mind), and for that matter one of '82's high-water marks? Because it was produced and written by the Chic Organization, that's why. [When Nile and Bernard produced together, they used that moniker - also on Miss Ross's diana album, I believe - akin to a N*E*R*D/Neptunes kinda thing.]

Here's what Mr. Carlin said about said single yesterday in his amazing review of every single to enter the U.K. top 40 in 1982:

Brilliant autumn-period Chic masterpiece. The punctum here is how the synth wavers (Boards of Canada!) seemingly offpitch behind Simon's vocals, thus admitting the existence of vulnerability).

To which I'd add:

Not only does Carly's vocal sound vulnerable, she sounds pained, pierced, under attack, like she's nearly fixin' to die. And then the geniuses that are Nile and Bernard offset it with an almost-island-feeling melody (with the synths sounding too close for my comfort to steel drums at points, threatening to send the song into carnival-organ territory, which would make it honestly alarming in its cruelty [the contrast, I mean, the contrast]) - and yes, of course that's Norma Jean and Alfa on the backing vocals. [2006 correction: er, that'd be Luci and Alfa, since Norma Jean left after Chic's first album.] Center for just a moment around the 5:25 mark on the 12" version (a sterling example of the "if you take something great to begin with and extended it, it'll be even better" dictum), and hear the sudden introduction of a piano countering Carly's "la-dee-da-dee-da"s, and hear what Chic might've been like with Carly as their singer. Why is this bit only not even 10 seconds, I ask? [It's a rhetorical question regarding a genuine frustration.] This is sincerely, secretly avant-garde. This is a new wave. Nothing's shocking, you say? I reply, "listen to this."

"Why," sadly, never appeared on a proper Carly album (though it's now available on Rhino's 2002 Anthology double); it was recorded for the film Soup for One. I've never been a fan of Ms. Simon's, even with her stunningly supple voice (it's the material, people, and really, how many fucking times can she record standards anyway?). But this song makes the entire rest of her career worth it. Get it at any cost, and send thank-you notes to the usual address after. [And thank you, Marcello, for reminding me.] [2006 addendum: "Why" can be found (in its 7" edit, inexplicably) on the scorching '02 UK comp Cream Collect: Balearic, as well as on these records, most of which I believe are in print.]