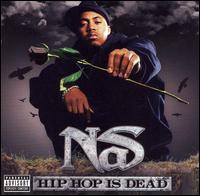 Daaaaaayum. There's a lotta late-breaking albums this year, aren't there? Ghostface's More Fish is probably the equal, at least, of Fishscale; I wonder if tossed-off Ghost is actually better? Vince Gill's These Days isn't late, really, but it took me a while to make it through four discs of Vinceanity. It's awfully good, though perhaps a bit overpraised. Then there's the new #1 album in the US, Nas' Hip Hop Is Dead - this is his second consecutive if-not-classic-then-damned-near (Streets' Disciple is seriously slept on); there's not a weak track to be found here. The Merle Haggard/George Jones collaboration, Kickin' Out the Footlights... Again, is seriously lovely as well.

For the record, I now count five great hip hop albums in a very weak year (agreed-upon, right?) for the genre: two Ghostface, Nas, Clipse, and (sleeper) Birdman & Lil' Wayne. Six if you include Missy's Respect M.E. import comp, and DMX is close. Plus there's of-hip-hop-if-not-exactly-hip-hop-sounding J Dilla's Donuts, and that BIG duets record which I like alot while admitting it's not all great. Great R&B albums of '06? Sadly, no new R&B made my top 20 (though some comps did: Chic, Stephanie Mills, Bobby Brown), but there are some good ones to be sure. To wit: Ne-Yo, MJB (Breakthrough, not that wack "hits" record), Beyoncé, Justin, and late-breaker-herself Ciara (whose album may end up the deepest of them all). Oops: and Prince's 3121 is pretty good, too.

Great year for country, though. Not only was there Cash's last will and testament (American V, I mean), but country-ish albums from Dylan and Jerry Lee joined him in my top 5. Alan Jackson, meanwhile, placed a pair in my top 20, with the beautifully hushed Like Red on a Rose beating out the beautifully gospel Precious Memories for a slot in my top 10. This was his career year, and it's a damned shame that more people didn't notice. (There's a lot more to Jackson than his 9/11 classic and "Chattahoochee," y'all.) And that wasn't all: the sadly ignored Barbara Mandrell tribute is superb, Little Big Town's '05 Mac-via-Mellencamp countryisms finally clicked this year (non-country types may particularly like their album), Josh Turner, Trent Willmon, and Julie Roberts all greatly impressed with sophomore efforts, and the Wreckers made a deserved rookie splash (Michelle Branch, who knew?). Plus Carrie Underwood's 2005 late-breaker spun off hit after great hit all year, peaking with her recent #1 "Before He Cheats."

Electronic music? Well, that Thom Yorke album was pretty good, as was the Pet Shop Boys' Fundamental (accept no substitutes, cop the deluxe edition with an extra disc of some smokin' remixes). Ghostly International's second comp is lovely if a bit long in the tooth, Henrik Schwartz's DJ Kicks another late-breaker, Mylo's '05-in-the-UK longplayer deserved better, and the Prodigy's remember-them? comp burned like Chuck D's Hollywood.

Oh, and I liked that Arctic Monkeys guitar-bass-drums album, too. And Sonic Youth are on a ridiculous late-40s/early-50s streak (like no one this side of guess who, Dylan), churning out insta-classics that aren't as easy as they look, while fellow New Yorkers TV on the Radio might yet be the inheritors of the SY legacy.

Comments:
I am continually (and pleasently) surprised at how many people besides me like that Thom Yorke disc.