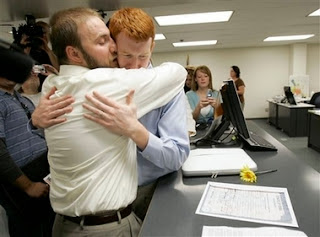 The caption, from the Associated Press: Sean Fritz embraces his new husband Tim McQuillan, right, after they received their marriage certificate, Friday, Aug. 31, 2007, in Des Moines, Iowa. The Ames, Iowa, couple was married a day after a judge threw out the state's ban on same-sex marriage. (AP Photo/Charlie Neibergall)
[Emphasis mine.]

Oh, you haven't heard? The gays are marrying, fast & furious, in Polk County, Iowa. The march of equality may be slow, but it's happening, folks. Get the fuck used to it.