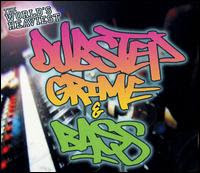 Luther Vandross, "Love Won't Let Me Wait": It's written-in-stone known that the late LV was a consummate song stylist with a mixed track record when it came to picking songs but a near-perfect one when it came to the pure singing, right? To these ears, one of LV's most perfect covers is his 1988 take on Major Harris's 1975 smash. Where Harris went straight for the bedroom, all painful eroticism, Vandross took a more restrained, romantic approach. The tempo is glacial, the an-ti-ci-PA-tion delicious, the arrangement understated, and Luther's vocal of course is one of glossy perfection. Stupidly left off The Essential, this is best found on The Best of Luther Vandross... The Best of Love. (Because of what's there/what's missing on each set, you really need to own both.) A

M.I.A., Kala: Every bit as good as you've heard it is. Truly world music - and worldly - M.I.A. spans the globe like Wide World of Sports to bring da noise, da funk, da flava, and that certain something that only she's got (start with her Sri Lankan heritage and go from there). A natural progression from Arular it's also better. Christgau's right to compare it to Late Registration - but in terms of consistency especially, Kala might actually be better. Marinate on that. A

The World's Heaviest Dubstep, Grime & Bass: This is one hot-shit triple-disc UK comp of just what it promises. The "Bass" disc in particular is some fascinatin' rhythms, ranging from booty-revival to d'n'b/reggae jax and good ol' fashioned circa-'98 breaks, all of it bass-heavy as you'd expect. Both the dubstep and grime discs have their share of scene heavy-hitters (Burial and Skream on the former, Lady Sov, Sway and Roll Deep on the latter - at least, those are the names the more neophyte among us are likely/ier to know), but it's all pretty solid. If you like this kind of thing, you'll love this particular thing. A-

Cream Collect: Techno: UK superclub/brand Cream got 3 volumes into this series before it ended in 2002, and while this isn't the finest of them (that would be Cream Collect: Balearic, which is rather stunning in its breadth), it's pretty damned good nonetheless - and also impressive in its breadth. If you like classics by the likes of Underworld, Hardfloor, Speedy J, Laurent Garnier, and Dave Clarke, then this is for you. If you don't know if you do, give this a try, as it makes for a fine "Techno 101" primer. Pick hit: Layo & Bushwacka!'s "Love Story," which just never gets old. A-

Comments:
I love the Smiths.

Aaron, I would never accuse you of anything less than seriousness. Not now, not ever.