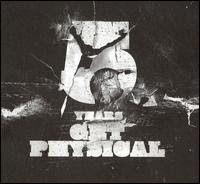 Rolling Stones, Jump Back: The Best of the Rolling Stones '71-'93: For my money, the best Stones comp. I don't need most of their '60s; that's already engraved in my DNA. As opposed to the overlong 40 Licks, this includes "Harlem Shuffle" (wherein they make like a good bar band) and "Rock and a Hard Place" (one of their most unfairly forgotten singles, from a fairly forgotten album made for the excuse of a major tour). The likes of "She's So Cold," "She Was Hot" and "Hang Fire" have yet to be anthologized, but I've given up hope. (That's why the original albums are still available.) The best of their '70s - and good God Mick'n'Keef were excellent producers who's never gotten the credit they deserve as behind-the-boarders - plus the most of their '80s ("Waiting on a Friend" can still be chill-inducing) equals the Stones' definitive single-disc (barring their '60s, which really are another matter entirely anyway). A

5 Years Get Physical: What's by some accounts the king of German tech-house labels celebrates a birthday with the obligatory double-disc comp: one of remixes, one of exclusive new tracks. While I'm getting (back) into electro-tech-house-whatever these days, I won't claim to get all of it; Booka Shade, in particular, tend to bore me to tears (their forthcoming DJ Kicks is deadly). But much of this is marvelously glitchy, techy stuff, especially on the remix disc - check Fakesch's mix of Booka Shade's (ha!) "Mandarine Girl," or the Rapture take on Williams' "Piccadilly Circuits" (very back-to-'87 Detroit to my ears, and c'mon - that's a great title). You also get rockish reworks, such as Lopazz's "Migracion" given a new look for Fujiya & Miyagi (almost like icy-cool J-indiepop!) and earl Zinger's remix of Elektrochemie, which for all the world reminds me of Jon Spencer Blues Explosion. The exclusives disc isn't quite as inspiring, but I'm intrigued enough by a few tracks as to investigate further Get Physical releases. Surprisingly refreshing. B+

Cream Classics Vol. 2: A triple serving of honest-to-goodness classics - for once the word's not being used idly. First two discs in particular are full of late-'80s-to-mid-'90s housey sublimeness: Juliet Roberts, CeCe Peniston, Brand New Heavies, Sounds of Blackness, Kings of Tomorrow, River Ocean, Inner City, and I could go on. Third disc is more tech-heavy, with '90s landmarks like Robert Miles' "Children" (birthed an entire gen of trance, for good & bad), Orbital's "Chime," and Moby's "Go." Not much in the way of duds at all here. A

Lil' Wayne, Da Drought Vol. 3: Two discs of exclusives (a track w/Juelz Santana from I Can't Feel My Face!) and jaw-dropping freestyles (see below). Not everything here is brilliant, but what is - and there's plenty of it - will tell you again that's he's the Greatest Rapper Alive right now. This is a serious contender for my year-end top 10, if not top 5. A