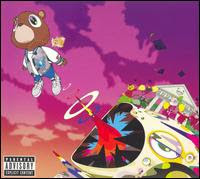 There's no one like Kanye West in the game right now. NO ONE.

He's a bit of a megalomaniac, he'll apparently never be a great rapper (though he's certainly capable of great turns of phrase), but he's also the most creative mofo making hip-hop these days. His highs are damned near higher than anyone else's. He hears differently.

That said, Graduation is an imperfect album, and that's alright with me. Track by track:

1. The Elton-sampling opener "Good Morning" is a terrible start, pedantic like 'Ye tends to be at his worst. And dull.
2. "Champion" will shock you the first time you hear it, as I can say with complete certainty that you've never heard Steely Dan sampled like this. Oh, and did I mention the sample is from "Kid Charlemagne"? Are you wet yet? I thought so. This is a perfect example of Kanye's ears, and how - there's no way to not overstate this a little - they're a little more advanced. The way this track is crafted is hands-down brilliant, and really a little avant-garde to boot.
3. "Stronger" doesn't seem to have any burn factor at all. I love the Daft Punk, I love Kanye's rhymes on this, I love how synth-heavy it is (even if you took out the sample). One of the singles of '07.
4. On first listen, I thought "I Wonder" was sampling Nina Simone, but it's actually Brit singer Labi Siffre. It's also a rather moving song. 'Ye overlays the Siffre voice/piano sample with heavy synth action and a boom-bap beat, and makes it work: at his best, there's no producer better than Kanye these days, and yes I'm including Timbo in that assessment.
5. If you're gonna sample a Michael Jackson song, let alone "P.Y.T.," do something good with it, y'know? Fortunately, that's not a problem on the T-Pain-blessed "Good Life," a perfectly breezy cut that's going to be a HUGE hit. One of my favorites.
6. "Can't Tell Me Nothing" is a decent placemarker, but it's definitely filler. How it's a single, let alone becoming a hit at R&B, is completely beyond me. And Lord knows that hearing Kanye say "you can't tell me nothing" is the ultimate in obviousness.
7. How weird that Lil' Wayne gives one of his weakest guest shots of the year on (arguably, in pop terms at least) the biggest stage. He really is the best rapper alive right now, but you wouldn't know it from "Barry Bonds." (The title's a stupid pun, too.) Add in some nothing music and you get the album's biggest disappointment.
8. "Drunk and Hot Girls": yes, Kanye, we get that you're apparently a fan of Girls Gone Wild, but did you have to waste a weird Can sample on an odd ode to it/them? And 16 bars from Mos Def, too? Not bad, just kinda there.
9. Dwele shows up the sing the title, there's a lovely string section, and some weird, almost early-Trax-sounding jerky keyboards (yay), but that doesn't mean I can necessarily tell you what the hell "Flashing Lights" is about. Or how, exactly, I feel about it.
10. Double-yay for DJ Premier scratching up Chuck D on "Everything I Am"! An effective old-soul sample complements Kanye's thoughtfulness finely. This is precisely the kind of cut that puts him so far ahead of the rest of the field...
11. ...just like his use of a Laura Nyro sample, which becomes something thrilling and honest-to-God exciting, as a chorus including Mos Def and John Legend sings along with it on "The Glory." A highlight deserving of every "WOW!" it gets, 'cause it earns 'em.
12. Chris Martin adds piano and a chorus to "Homecoming," which is - fine, but nothing terribly exciting. Though having grown up just 2 hours from the Chi, there's something fun about hearing Mr. Coldplay singing about fireworks over Lake Michigan.
13. "Big Brother" closes the album perfectly. This tale of Kanye's complicated relationship with his boss, Jay-Z, actually put a lump in my throat on first listen - which is especially shocking since it's about a multimillionaire superstar detailing how he feels about a multimillionaire superstar CEO. Here's the thing: if you love hip-hop, have loved it for years, this one'll get you.

Graduation's flaws probably drag it down to an A- overall, but it's the best damned A- you'll hear this year - maybe this decade. I don't want to call it a flwaed masterpiece, exactly, but I'm thinking it. A must-hear and a must-have, on Graduation Kanye proves yet again that when he's at his peak, he is untouchable. Even with its weak tracks, I love this album.