Desert Island Discs (#3 in a series) 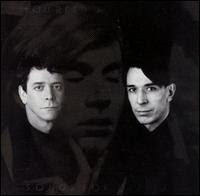 Lou Reed/John Cale - Songs for Drella (Sire 1990)
I suppose that, due to my persistent perversity, it would make sense that this is my favorite solo Lou record, and might yet be (depends on the day/week/year) my most beloved Reed/Cale collab. Yes, I know - "How can you"/"What an idiot"/"Velvets Godlike blah blah blah." And yes, I also know that the Velvets, musically speaking, were rather Godlike; to my ears that's unquestionable. But I feel a stronger emotional connection to this, Reed/Cale's first work together post-VU. That's not surprising, at least not to me, because I've always been a huge Warhol freak. (I even lugged all 900-odd pages of The Warhol Diaries around the halls of my high school upon its publication my senior year, and positively absorbed its contents. Bianca! Liza! The art world! I didn't just admire Andy, I wanted his life, down to the minutiae of logging his cabfares.)

What's in many ways the most surprising is the sheer prettiness of much of Drella (as opposed to how well Reed and Cale collaborate, picking up like they never etc.). Moreso than any Velvets record, this sounds like the most egalitarian of Lou and John's work together, very much equal parts, playing to both of their strengths like little either's done before or since. Mostly, Cale gets the slow(er), ambient ones while Reed rocks out, but each complements the other: Reed's surprisingly (there's that word again) atmospheric, sounds-treated-but-not guitar washes backing Cale, Cale's viola slashing away alongside Reed's guitar on the more propulsive tracks, adding acid, bitter and sad. I'm oversimplifying, of course.

Most of Reed's songs are about Andy, whereas most of Cale's are from Andy's voice, Cale standing in for his late friend and - mentor? Exactly what was Andy to Reed and Cale? That's never quite answered, which is fine; not everything need be told/said. There's an economy to both the words and music here which makes the results gleam like a blue diamond, with Reed playing guitar and Cale providing keyboards (both quiet synth chords and jagged piano) and viola. That's it: no drums, no bass, not needed nor missed. A little arty, yes, but so musical, so lyrical - so personal. Nearly every song is its own standout, so there's no need to spotlight specific tracks. Heartbreakingly lovely, this is one of Warhol's finest legacies. Inevitably, he'd hate it, but that's not for him to decide.

Comments:
With the exception of "A Dream," liIt never occurred to me that the Cale songs are from Andy's p.o.v. Anyway, it's cool that Cale gets to say, "I hate Lou, I really do."

You've convinced me to replace my old cassette copy of this album! Your review is spot on but I'm not convinced that Andy would hate it.