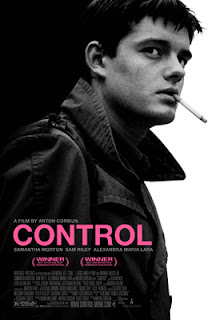 Anton Corbijn's first feature film, Control, looks as great as you'd expect from a man whose career has been built on the iconic photographs and videos he's shot for (most notably) U2 and Depeche Mode. The cinematography and image composition are often stunning, and it's shot in gloriously bleak B&W. It also features a pair of sparkling performances from newcomer Sam Riley (as Joy Division's doomed Ian Curtis - and if you think his acting is good, his spot-on singing might be even better) and the always great Samantha Morton (as Curtis's wife Deborah, on whose memoir the film is based). Control's chief fault is its screenplay, which is mostly - ironically enough - black and white, with no shades of grey. This is largely Deborah Curtis's story, and that's to the film's detriment; some further examination of the balance of power in Joy Division, for example, would've done nicely. That said, I'd love to see what Corbijn could do with a story from scratch. B-

Michael Clayton is a classic-feeling Hollywood film, very '70s. It's twisty and layered, features a slew of dead-on performances, and is ably directed but more importantly superbly scripted (both by Tony Gilroy, screenwriter of the Bourne films). It's even got the best score I've heard in years from James Newton Howard, all ambient and Moby-like (when it comes to scoring, that's a good thing). George Clooney does his best work as an actor here, nailing all the nuances in a lawyer both more complicated and simpler than he first seems. Tilda Swinton is great, as is Sydney Pollack (when did he become a more interesting actor than director?), and Tom Wilkinson is ridiculously fine as the lawyer who goes off the rails (and grid) and sets the film's main story in motion. Clooney and Wilkinson should be locks for Oscar nods, and I'd be pleased for Swinton to receive one as well. The gorgeous cinematography, script, and direction should get similarly nommed - and Michael Clayton also should be up for Best Picture, 'cause it's that damned good. This is as good as Hollywood gives these days; this might be the year's best film. A+

Everything you've read and heard is true: Joel and Ethan Coen are, in fact, back. No Country for Old Men falls somewhere on their spectrum between Blood Simple and Fargo, but might be better than both of those. This very bloody film (it could've been titled There Will Be Blood, as could've Eastern Promises) holds within it a shockingly original adapted Coens screenplay (from Cormac McCarthy's novel), assured, top-of-their-game direction, some of Roger Deakins's finest cinematography ever - and that's saying a lot, and a performance of stunning magnitude from Javier Bardem (it's amazing to consider that this is the same actor who so ably embodied famed gay Cuban poet Reinaldo Arenas in 2000's Before Night Falls). Tommy Lee Jones also turns in superb work; his well-creased face says more than many actors can with 200 pages of dialogue, but give Jones some dialogue and he's better still. If Michael Clayton isn't the year's best, then this is. A+