Desert Island Discs (#4 in a series) 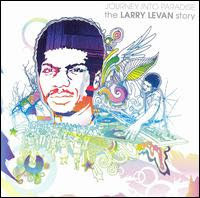 This was my #2 album of 2006, and at this point might-just-might be my favorite album of the decade. Journey Into Paradise... The Larry Levan Story isn't a comp of Levan's greatest remixes (still need one of those, please), or of his absolute most monster tracks - what it is, is a sampling of what made Levan the legend he's become (and, really, was in his time). It's a collection of some of his fiercest mixes (such as his Garage Version of Inner Life's "Ain't No Mountain High Enough," for which the word "epic" was invented) and favorite tracks to play at the Paradise Garage, from Phreek's "Weekend" to Talking Heads' "Once in a Lifetime." They're all in one place, all superbly remastered, and provide a delirious, fascinating, joyous snapshot of what made Levan who he was. The opening of Change's "Paradise," which opens disc one, is enough to give me chills and thrills - that bassline, whomp! Excellently sequenced and put together with lots of obvious love, this may well be the definitive collection of late '70s/early '80s club music.