George Jones - Burn Your Playhouse Down: The Unreleased Duets (Bandit 2008) 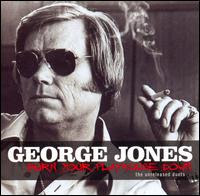 This collection of tracks left over from the sessions for 1991's Friends in High Places and 1994's The Bradley Barn Sessions may seem like, well, leftovers, but it's far from it. The Ol' Possum exhibits as fine a voice as ever across this set, but the real draw here is the song selection and his collection of duet partners.

Take as one example Jones' take on "Rockin' Years," originally a #1 smash in 1989 for Dolly Parton and Ricky Van Shelton (check out their version here). In its original form, "Years" is an ode to sticking with your partner through the end, until the end; "rockin' years" encompass everything from "rockin' babies" to "Rock of Ages." Trading Van Shelton's sexy, rich tones for Jones' (ahem) more lived-in voice recontextualizes the song, however (it's still a duet with Parton), as it no longer sounds like a song between two young(er) lovers - now they're a pair who've already seen each other through plenty. There's a sense of gravitas in this version missing from Van Shelton's; then again, when Jones is involved, that's not so shocking.

"She Once Lived Here," done with Ricky Skaggs, has a pleasing, loping quality to it, but there's an element of - is it sleepiness? - to it that leaves it slightly lacking. A Jones/Skaggs duet seems like it should be more fiery than this is. And frankly, I'd expect a sleepy performance from Mark Knopfler, and that's exactly what he bring to "I Always Get Lucky With You" (odd song choice, too). On the other hand is another superstar British guitarist: step up, Keith Richards! His duet of "Burn Your Playhouse Down" is sassy and saucy, damned near everything you'd want in a collaboration between these two salty old coots.

If there's a chief complaint to be leveled against this set, it's that it's a bit too mannered. I'd have hoped for a bit more grit, say, from the Shelby Lynne duet on "I Always Get It Right with You." As a whole, Playhouse is just too polite for its own good - maybe that's why these collaborations were left off the albums for which they were originally recorded? It's almost entirely midtempo, and can get monotonous in spots. That said, highlights such as "Selfishness in Man," with Vince Gill, are high indeed; Jones' and Gill's harmonies on the chorus are simply pure and gorgeous.

And yes, there's the draw of a previously unreleased duet with Tammy Wynette here, "Lovin' You, Lovin' Me," recorded in 1977. It's good enough, but it's not going to result in any jaws dropping. Which is essentially how one can sum up this album: if you're a fan of the Possum, you'll get some enjoyment out of it; if you're not, it won't convince you. A solid, if unspectacular, addition to Jones' catalog. B