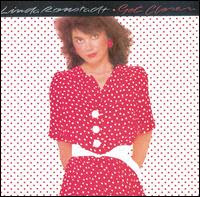 This is an oddly fascinating record in many ways, so of its time occasionally, more often out of time (listen to the cheesy synth flourish going into the bridge on the title track, which you likely only know with slightly revised words as a 1980s toothpaste commercial, for an example of the former) (the latter's exemplified by her increasingly ahem "interesting" choices in covers at the time - note that only said title track and the genius Jimmy Webb composition "Easy for You to Say" were remotely current in 1982, and that she covers the likes of "Tell Him" and Ike & Tina's "I Think It's Gonna Work Out Fine"; Stephen Thomas Erlewine points out that "Ronstadt had lost touch with the mainstream pop scene," and he's not even close to wrong). Christgau, meanwhile, notes that "never has Ronstadt sounded more the art singer than on this painfully precise collection," and he's not wrong either, especially on the likes of Kate McGarrigle's "Talk to Me of Mendocino" (copyright '75). That's not to say that's necessarily a bad thing, though; her rich soprano caresses "Mendocino" beautifully, as well as Webb's "The Moon Is A Harsh Mistress" ('74) and D. Parton's "My Blue Tears" ('71, and recorded '78, a precursor to Trio five years hence as it's entirely played and sung by Ronstadt/Parton/Harris). The more I hear Get Closer the more I hear its out of touch/out of time-ness, but considering I'm listening to it a full quarter-century after its release, that really doesn't matter. Her last "current" pop album before it all went Nelson Riddle, and then mariachi (and let's try to forget '89's Cry Like A Rainstorm - Howl Like The Wind), is a surprisingly solid, unsurprisingly Ronstadtian record, and in my estimation worth tracking down. B+

Must work this into my everyday vocab somehow.