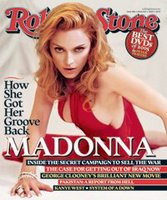 She does still give great cover, doesn't she?

I've updated again over at submeat '05 (it's getting pretty regular these days), but in a bigger way than usual; both my #1 single and album are new. Actually, my #1 single is, but my #1 album has been there before. "Stay Fly" has toppled Snoop on my singles list because that beat is so effing undeniable (and I like the verses too, even on the remix featuring Slim Thug, Project Pat and Trick Daddy). I've yet to tire of it, and doubt I will. On my album list, meanwhile, Billy Corgan's replaced Kanye at the top, for one simple reason: I feel an emotional pull from TheFutureEmbrace that I don't with Kanye, and that's enough to put Corgan's opus over the top. Late Registration is more brilliant, yes, but it doesn't move me, and that still counts for something in my corner of the world.

Also: I've specified Ralphi Rosario's mix of "Don't Cha," as that's the particular version that soundtracked much of my summer (and thus I've dropped Busta from the credit, as he's not on that remix), and Rev Run's absurdly hard-rocking (by way of Joan Jett) "Mind on the Road" has cracked my top 10 singles, bumping Missy Elliott off the list. Only 6 weeks + 2 days until the end of 2005...

Apparently, we're looking for new writers at Stylus. When I joined the team, however, Todd didn't ask me the "decades" question, so I'll take the opportunity to answer it now. [Artists are listed in random order; those in parentheses came close to making the top 5.]

Watched Garth's CMT special this weekend, and wow. We've finally got details on the Lost Sessions disc of the forthcoming Limited Series box, and I'm so there. A duet with Martina McBride? Another track with backing vox from Alison Krauss? Not to mention that Chris LeDoux tribute, which sounds better every time (and which he'll be performing on tonight's CMA Awards)? Hell yeah! (It'll also be nice to have his last 2 studio albums, and Double Live, remastered, and the DVD's a nice touch.)

Speaking of CMT, their website has an exclusive, sensational 4-song performance by Bobby Bare of songs from his incredible new album, The Moon Was Blue (which I gave an A review, and is accordingly one of my top 5 albums of the year). I heartily recommend you check it out (and wish, likely to no avail, that they'd make one of 'em a video to add to their rotation).

First reaction to the new Madonna album: pretty good, but a bit long. The lack of balladry is welcomed, but ballads also help break up an album, sometimes; Confessions on a Dance Floor tends towards the heavy thump-thump-thump, which gets monotonous. But I like it. That said, if you can find a way, I've gotta implore you to check out her performance of "Hung Up" on the recent MTV Europe Music Awards. Lady Madonna was on fire, singing great (she's dumped the faux-Brit accent for his singing, at least this time), dancing even better, and showing & proving that her bikini waxer deserves a Nobel prize of some sort. She was jaw-droppingly great; nothing else on the show was even in her ballpark.

Reviews I've got forthcoming at Stylus: the abovementioned M and Garth, Rodney Crowell, Carrie Underwood (yep), Masters at Work's The Kings of House, Steve Lawler's Lights Out 3, and the deluxe edition of Sonic Youth's Goo, among others.

I've recently been a tiny bit obsessed with McCartney's 1986 flop (really, I think even ...Broad Street did better commercially) Press to Play. I was prompted to seek it out after reading the good Mr. Soto's take on it, and I'm so effing glad I did. This is a truly odd pop record, considering it's coming from one of the most famous (and famed, and they're not the same thing) tunesmiths of the last half-century. Plus, damned near every superstar was making weird-to-bad records in 1986 (Jagger to the white courtesy phone, please!); this falls on the weird side of things. And, frankly, the surprisingly good side, as well. "Only Love Remains" is to this day my second-fave Macca single (and like my favorite, "No More Lonely Nights," a mid-'80s ballad, talk about weird). Soto said in his piece that Press to Play is out of print, and he's correct, but it's still available as an import - remastered, even! Amazon's got it.

The bf and I just finished watching the first season of The Amazing Race, finally on DVD; I'd never seen it, as I didn't get into the Race until season 4 (the "Reichip" edition). What superb television in pretty much every sense, wow. Now if only Viacom/CBS would see to it to release the following seasons; instead comes word that last season (number 7, the Rob & Amber season) is coming in time for Christmas. What about the others, you dolts? (And who really cares about season 7, anyway?) We're watching the "family edition" this season, yes, but not loving it. I'm ready for a return to what makes the series the finest reality that TV can offer - which includes a return to two-person teams - come February '06 or so with The Amazing Race 9.

Nice corollary to my preview of next Tuesday's CMA Awards in this Associated Press article on how there's still no country radio in NYC.

Fuck, fuck, fuck. See? You didn't watch it, and now the best show on television is being cancelled, along with its time-slot partner Kitchen Confidential, one of fall's best new series. Dammit!

That new Lil' Flip joint, the one produced by Mannie Fresh (I believe it's titled "How It Do") is like fyah.

Think I'm gonna catch a matinee of The Dying Gaul next week, in spite of its poor reviews, largely because I hear there's some pretty hot sex scenes between Peter Sarsgaard and Campbell Scott (who I've loved since Longtime Companion). Can anyone confirm/deny this?

In the past month, I've purchased 5 Aretha Franklin albums from the past 20 years. I'm not sure how I feel about that. 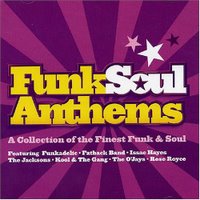 Budget compilations here in the U.S. are generally dodgy at best, execrable at worst. For whatever reason (I've no idea myself), their strike rate in the U.K. is much better. Case in point: the Virgin Megastores here in L.A. (and perhaps elsewhere) have recently had a display of a whole bunch of various Various Artists comps released by Sony BMG (UK). Amongst the morass of the usual Miss Independents (including, ahem, Hilary Duff - and, inexplicably, Usher) and Ultimate R&Bs (er, no most of it's not) was one titled Funk Soul Anthems. At first glance, it appeared to be just another mediocre 2-disc set - "Car Wash," "Love Train," "Theme from Shaft," the obvious like. But a closer glance shows something more.

The album opens with Funkadelic's "One Nation Under A Groove," a classic that's not yet so obvious as to be obnoxious. From there on, Funk Soul Anthems surprises as much as it doesn’t. Sure, you expect to find Cameo’s “Word Up” here, and you will. But chances are you wouldn’t expect this to include Odyssey’s “Going Back to My Roots,” or “Hi, How Ya Doin’?” by Kenny G (yes, that appalling smooth-jazzbo, but from 1983, when he was, believe it or not, making R&B fusion records) featuring Kashif (!). Some of the more obvious selections delight in the way they’re presented – to wit, the brilliant back-to-backness of Herbie Hancock’s “Rockit” and Shannon’s dancefloor monster “Let the Music Play.”

To be sure, there are some downright odd choices here. Since when is Level 42 “funk” or “soul,” exactly, let alone creators of anthems? I like “Lessons In Love” enough, certainly, but I’m not sure it belongs on this particular compilation. Same with Freeez’s “I.O.U.,” an early electro-as-pop milestone (its sore-thumbness made even more profound by its placement immediately following Maze’s “Twilight”). These are more than made up for, however, but the previously unknown (to me, at least) gems hidden amidst this double-album’s 44 tracks. Lonnie Liston Smith’s 1975 jazz-funk totem “Expansions” (I should know it, I know, and yes, I am ashamed) sneaks up on you and grabs you by the – well, grabs you in a painful way, let’s say, and doesn’t let go ‘til you submit yourself utterly. Billy Griffin’s “Hold Me Tighter in the Rain” is an of-its-moment (1982) slice of creamy Britsoul nonpareiled. I could go on; selections by G.Q. (known in the U.S. for their ’79 hit “Disco Nights”), Fat Larry’s Band, the Jimmy Castor Bunch, and the aforementioned Kenny G, amongst others, may only be known by most as the source material for hip-hop tracks, if at all.

There’s a certain pleasure in having all these tracks in one place, as well, not just Funkadelic and Shannon and Cameo but Indeep and Bootsy’s “Stretchin’ Out” and Boz Scaggs and “Get Down On It” and the Mary Jane Girls and “Sexual Healing” and, oh yes, Luther’s “Give Me the Reason.” And I’ve not even made mention of Aretha’s cover of “What A Fool Believes”! Especially considering the price you’ll likely pay for it (I got mine for a tenner; if you’re not nearby a Virgin Megastore, you can buy it from Amazon UK here), Funk Soul Anthems is fairly indispensable. Did I mention that it’s just flat-out fucking great, even though it includes Rockwell? Okay, then. A 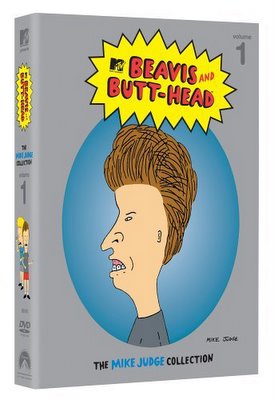 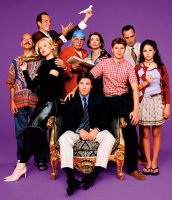 WHY aren't you watching the best show on television? Arrested Development finally returned last night, hitting ever more absurdist heights. This is utterly brillant comedy the likes of which network TV hasn't seen since the glory days of Frasier, at least. Miss it at your peril.

Michaelangelo Matos is one of my favorite writers around, period, and I'm not just saying that 'cause he's occasionally my editor. His book on Sign 'O' the Times is one of my favorite music books, ever, and his blog (and for that matter, his posts on ILM) manages to be informative and educational without ever being dry - rich, meaty writing. (That's not even mentioning his work writing for and editing the Music section of Seattle Weekly.) My favorite recent piece of Matos' is this review of the SOTT film: short and sharp, if not shock. 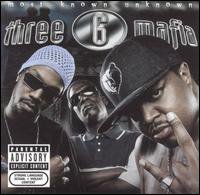 Snoop betta watch his back; his claim on my single of the year is being seriously threatened by an unlikely (or are they?) crew... (and yeah, I know - like Snoop's sweating what some blogger-slash-rockcrit thinks). "Stay Fly" smokes so hard it makes me cough. Ridiculous!

Recent observations garnered from watching (too much?) VH-1:

1. Quite possibly only Gwen Stefani could get Slim friggin' Thug (love his voice, love it) onto the former Video Hits One, which the new queen of pop does by featuring Slim on a verse of her new single/video, "Luxurious." Gorgeous clip, BTW.

2. Quite possibly the only thing better than new chapters in R. Kelly's "Trapped in the Closet" saga is hearing Aamer Halem narrate highlights from the first five chapters: "and Bitchfest 2005 is on!!!" Oh, and R. Kelly has officially lost his damn mind.

3. VH-1 really needs to stop promoting But Can They Sing? every 5 minutes.

4. I'm delighted that Universal is releasing "The Brat Pack Collection," 3 classic '80s teen flicks in a DVD boxed set (actually, it looks like a Trapper Keeper). But why include two of the John Hughes-Molly Ringwald classics (Sixteen Candles and The Breakfast Club) and not the third (Pretty In Pink, of course), instead replacing it with Weird Science? I'm sure it's got to do with studio issues, but really folks, can't we come together? It's the Molly trilogy we're talking about! This is important!!!