Last year, 3 of the albums on my Pazz & Jop ballot placed in the top 40. This year, it's just one, albeit the #1. (As ever, my singles selections are somewhat more in tune with the general electorate.) Here's how my ballot stacks up in relation to the results:

*In my three years as a P&J voter, this is the first time that I've been the only voter for any given album.
**The original version of "Don't Cha" placed 48th (14); amazingly, one other voter specified this remix.

Meme from my dear Johnny:

FOUR MOVIES YOU COULD WATCH OVER AND OVER:
Say Anything...
Camp
Hoosiers
sex, lies and videotape

COMMENTS
My two favorite country albums of 2005 sounded old, yet somehow fresh – certainly fresher than Big & Rich’s increasingly schticky country-rock-hip hop hybrid, or Trace Adkins’s misguided (and perversely entertaining) “techno” mix (read: looking for those line-dancing dollars) of “Honky Tonk Badonkadonk” (bet Chuck Eddy loves it). Between ‘em, however, my top two didn’t sell gold; one, a shoulda-been-an-event, the first solo album in 23 years from a major ‘70s hitmaker, barely even made a blip on the chart radar (though Tower, God bless ‘em, have had it on sale for months now). Calling it country might be a stretch to some, but Bobby Bare’s The Moon Was Blue certainly feels country to me, at least as much as last year’s biggest vet-comeback record, Loretta’s Van Lear Rose. Difference is, Bare made a better album.

Don’t get me wrong; I’ve got plenty of affection for Van Lear; I just find it a tad overrated. Bare’s album, on the other hand, is so underrated (has anyone else even noticed it?) as to be ridiculous. His producers, Mark Nevers and his own son, Bobby Bare Jr., gave Moon a gorgeous sheen, and he gives the vocal performance of his career. This ain’t “Dropkick Me, Jesus, Through the Goalposts of Life,” and frankly it’s all the better for it. Hearing Bare take on “Are You Sincere” is one of my musical highlights of 2005.

Even better this year was Lee Ann Womack. Damn! When she took both the CMA Awards for Single and Album of the year, I was thrilled – and blown away. After the would-be-crossover nightmare of her last album, she came back country like I’d never quite heard her on There’s More Where That Came From, making all late-‘60s. I didn’t think she could possibly take two of the biggest CMA trophies, but I’m glad she did. They’re my album and single of the year, too, largely because they’re so damned true. For good measure, Womack’s got my #2 single as well. Curious as to why I picked “Twenty Years” as my tops? Just listen to the way she sings “Water under the bridge” and nails the ache: that’s why.

I love the video for “Twenty Years,” too, but what a shame it debuted about a month after its period cousin – and the true clip of the year (why no category for vids in the poll, anyway?) - Faith Hill’s “Like We Never Loved At All.” The resonance of its video helped transform an okay ballad into the high-drama single of the year (hubby Tim’s harmonic help doesn’t hurt, and his presence in the vid is even more essential). Pop clip über-director Sophie Muller, who knows a thing or two about the text (cf. No Doubt’s “Don’t Speak”), blows “Like We” into a soap-operatic masterpiece, a hetero, George and Tammy-esque take on Brokeback Mountain. The king and queen of (country) America play Jackie & Isaac, a ‘60s duo whose personal pairing has collapsed while their professional one is still blazing. He’s got a pop tart on his arm and she’s got a new marriage proposal, but they clearly still want the ones they can’t have (i.e. each other, again), and it’s driving them mad. It’s written all over their faces, even. The acting lessons both Hill and McGraw have taken are in evidence here; they push the emotion - they push it real good. Then they push it some more, and suddenly we’re drowning in it. It rings true, though, and that’s the thing. The first time I saw “Like We” I nearly lost it, and I’m not the cryin’ kind. The emotional gutpunch really is a gutpunch that you can feel, and that’s why this is the best video of 2005.

Thank God for CMT, for that matter. Thanks to CMT (and its public-access illegitimate cousin, GAC), videos are still being made by damned near every country artist, new and vet alike (apart from George Strait, but he’s King George and you’re not, so he’s allowed) (plus most of the videos he has made, save “Check Yes or No,” have been fairly awful). Toby Keith’s still the undisputed king of the medium, which he kept proving this year with the likes of “Big Blue Note” and especially the CMA champ “As Good As I Once Was,” as good as TK classics such as “Who’s Your Daddy” and “I Wanna Talk About Me.” I’m no fan of Honkytonk University – to my ears it’s too didactic by far, for starters – but on the small screen, his pre-eminence is unrivaled, for good reason. Martina McBride and Reba McEntire keep making the most straightforwardly narrative (and straightforwardly, shamelessly tear jerking) clips (“God’s Will” and “He Gets That From Me,” respectively, were as shameless as it gets – and shamelessly good, did I mention?), while Alison Krauss + Union Station continue to make one lovely set piece after another. (I keep waiting in vain for a beach-set clip featuring Dan Tyminski in swimwear [yeah, I said it], but waiting in vain ain’t the same as holding my breath.) And then there are all the hunks; CMT’s the most guy-crazy television this side of TRL circa 2000 (BSB, *NSync, Nick Lachey pre-Jessica, et.al.). Kenny! Keith! The unlikely Dierks! Josh Gracin! And most of all, these days, Billy Currington, who survived Shania’s “little bit of party” and came out the other end with – is that an 8-pack?! With “Must Be Doin’ Somethin’ Right,” Currington delivers a PG-rated “Wicked Game,” soaked in color and seawater and even sexier – at least for those of us so inclined towards the male anatomy. I’ll say it again: Thank God for CMT.

Of course, the channel’s got another fine function – it’s the best damned country station in America. They played frigging Nelly and Tim’s “Over and Over,” for pete’s sake! Nelly, on CMT, back-to-back with the likes of Brooks & Dunn! How bizarre, you might think, but in the CMT context, it totally worked. Marc Broussard works there, too, as does Rhonda Vincent, and even John Mellencamp, alongside Trisha and Jo Dee and Gretchen and would-you-believe the ol’ Possum, George Jones, who released the fine covers album Hits I Missed… And One I Didn’t this year and even got his own video into CMT rotation (didn’t hurt that “The Blues Man” featured Dolly, or that it’s easily his best single since “Choices”). No “hot country” radio station in the U.S. will touch oldsters like Jones or Parton or Kenny Rogers or Merle Haggard – but CMT loves, and plays, ‘em all. For that reason alone, I’ll forever be a fan (if their playlist radically changes, so will my fandom). CMT’s the best venue country music has going for it these days, hands down.

Speaking of television, it’s funny to me how Nashville Star has given us basically no one worth a damn – I just don’t get all the love for Miranda Lambert, who I expect may well win this very poll this year; every time I see her I find myself thinking how much I bet she’d have loved to sing for .38 Special, and yes that is a bad thing (as is Van Zant), thankyouverymuch – save for poor Buddy Jewell, who won the first one, got some cheap hits out of his debut, made a great single to open his second album (“If She Were Any Other Woman,” the pure love song of the year), but forgot to have anything to back it up. Yet American Idol has already given us Josh Gracin (who reminds me of John Michael Montgomery, if JMM were generically, gay-porn-cute) and his three top 5 singles, and now of course there’s reigning Idol Carrie Underwood. I was oh, so skeptical when she won, but Some Hearts proves me wrong. It’s the best album yet from an Idol vet (Fantasia’s highs are higher, but Carrie’s much more consistent), a perfectly polished country-pop (as opposed to pop-country) full-length highlighted by the bravura single “Jesus, Take the Wheel,” which gets better with each listen. She’s no Martina yet by any means, but she might well be on her way.

Are Garth and Trisha the new first couple of country? Sure, they wed at year’s end, but had very different years – artistically, at least. Garth inevitably sold more with yet another Limited Series boxed set, which is a steaming load of crap, nothing but repacking and marketing at its finest (along with one good new single, the “just [Chris] LeDoux it” ode “Good Ride Cowboy,” which just barely missed my singles ballot). He really should be ashamed, but being the expert businessman he is, I’m sure he’s proud of himself. Hopefully, he’s even prouder of his new bride, as Trisha hit a new career peak with Jasper County, a gorgeously soulful country album the likes of which I’ve barely heard this side of Neil Young’s finest. She should, along with Lee Ann Womack, be one of the ruling women of country rather than simply a “critical favorite” these days – but thank goodness she’s following her artistic heart, as opposed to Garth’s following the sales figures.

Am contributing - we'll see how much - to a new collaborative soul blog, Back and Forth. The participants are fairly outstanding if I do say so myself, so it's definitely worth your time. Still need to do a final update over at submeat 05, and for that matter need to start one for '06, as January's almost over already. Reading lots, not writing enough, and up to my eyebrows in CDs (not that I'm necessarily complaining).

Nashville Scene's 2006 Country Music Critics Poll is out, and I'm pleased to say I was a voter this year; my #1 Artist, Female Vocalist, and Album was shared with the consensus, and the poll's #1 Single was my #2. A comment of mine was included, too (under "Technology"). I'll post my full ballot and comments shortly. And coming next week: Pazz & Jop!

Oh, and this is a mighty beautiful vision.

You know, in case you were curious or something. 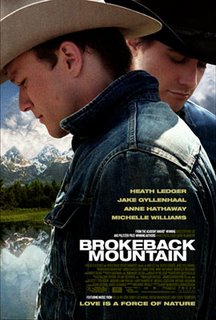 Best of 2005, hands down.
Breathtaking. Devastating. Astonishing.
(And it made me cry, in the theatre.)