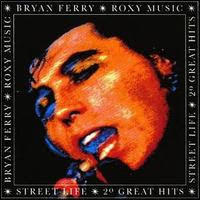 Has ever a more perfect single-disc hits record (-slash-compilation) ever been released?

Sure, you can argue for songs not included (my vote goes to "The Space Between"), but this is an honest-to-God definitive collection, the crucial 20 singles by Roxy and Ferry. You want to be blown away? Check out tracks 2-6, each of them originally from 1973 - which means that in the course of 12 months you got Ferry doing "A Hard Rain's A-Gonna Fall" and "These Foolish Things," along with Roxy's "Pyjamarama," "Do the Strand" (the essence of glam, and arguably the DNA for Pulp) and "Street Life" (which, appropriately, I was listening to on my commute this morning while reading John Rechy's City of Night). That's the true definition of awe-inspiring.

From "Virginia Plain" to "Slave to Love," and not a bum note to be found, this is pure aural Kobe beef. I dearly love 2004's triple-disc Platinum Collection (more album tracks and a third disc that's all post-"Slave to Love"), but for the essence of Ferry and Roxy Music, this is all you truly need. Roxy was a band like no other before or since, a genius collision of sophistication and dirty sexy rock, as capable of supper-club-ness (specifically in their later years, cf. Avalon) as skonking proto-DOR (such as "Virginia Plain" - for better and worse, an entire generation of NYC dance-rockers can be blamed on Roxy [and Talking Heads - by the way, it occurred to me recently that nearly the entire output of DFA has its genesis in the Heads' "Making Flippy Floppy"]). For his part, Ferry's tastes have generally been fascinating (though recent moves say otherwise); as well-documented by Scott Woods, his early cover albums in particular are nothing if not interesting - and are often rather shockingly brilliant.

Another reason to go with Street Life as the Ferry/Roxy comp of choice: if you're turned off by the smoothie Ferry of "Avalon" and "Slave to Love," you're in luck: the latter is the (chronologically) last song here. The years covered by this album, '72-'87, are Ferry's shall-we-say much more lively ones (cf. Jerry Hall). When lively especially, Roxy was damned near unbeatable. They represent everything I love about rock'n'roll (apart from, say, volume - see G'N'R), at times even including pretension. Roxy Music - and Bryan Ferry, at his finest - inherently understood what's so wonderful about music, and were actually able to translate that into their recordings. They're fucking GODS, and if you've not yet bowed down, it's time to get on your knees.