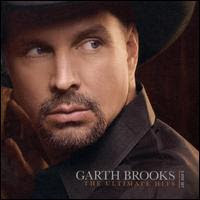 The biggest rock star of the '90s wasn't Kurt Cobain, or 2Pac, or Bono: it was Garth Brooks. He sold more albums than anyone, sold more concert tickets than anyone, and was larger than life in a way that even the late Cobain and 2Pac weren't after their deaths. (They may seem like legendary, epic figures now, over a decade since their passings, but there's still a huge swath of America who doesn't know who they are - but you can bet those people know who Garth is.)

His songs struck a chord in America, as Garth sang about everyday men and women in much the same way that Springsteen did in the '80s - he was that kind of rock star. The fact that he was singing country music made his feats all the more impressive. We'd never seen anything like Garth, and probably won't again.

And God, he was good.

There hasn't been a good summation of his career in some time, though. 1994's The Hits has been out of print for years, and those Limited Series boxed sets (particularly the second one, grrr) are just his original albums, barely tarted up and repackaged. So it's about damned time for The Ultimate Hits (understatement has never been Garth's forté), 30 honest-to-God HITS plus four obligatory new songs AND a DVD with 33, count 'em, videos, many of 'em newly-made. It's selling for cheap, too, and not just at Wal-Mart. If you wanna learn something about the past 17 years of country, and/or the biggest-selling solo artist in U.S. history (he recently passed Elvis - again), you need to pick this up.

Garth's hits are largely impeccable; he manages to connect with listeners in a way that few before him have to such an extent. Kenny Chesney, say, seems like a fun guy you might wanna throw back a few cold ones with, but Garth is YOU/ME/US. He sings universal truths with a touch that gets 'em across - who with a heart can't relate to "Learning to Live Again" or "In Another's Eyes" (a lovely duet with his wife, Trisha Yearwood)? And his cowboy songs are superb, from "Rodeo" to the Chris LeDoux tribute "Good Ride Cowboy."

Is he cornpone more often than not? Sure, and that's yet another part of his appeal: Garth Brooks is kind of a big dork, that guy who works in the grain mill and shows up at the local bar from time to time, perhaps occasionally hitting on that pretty cocktail waitress he'll never get. He's an expert of making himself (through song) seem like nothin' special, even while we all rationally know that he's precisely the opposite. It's Garth's ability to make himself seem like "jes' folks" that's made him a millionaire so many times over.

Oh, and his two big covers - of Billy Joel's "Shameless" and Dylan's "To Make You Feel My Love" - are sensational. Garth actually undersings the latter (which he almost never, ever does), coaxing out the lyric's tenderness with subtlety. He takes the reverse tack to the former, to great effect: leaving everything out there is kinda shameless, isn't it?

For better and worse, the 34 songs collected here chart the course of country since 1990 - more for Garth's massive influence than for trend-watching. Garth is his own trend. We should all be this unhip. A

Comments:
I wish you'd expand this.

I didn't even know this was out--thanks!