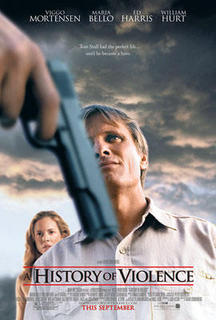 It's not a brilliant film all-around, and I frankly expect I'll see better before the year's out, but nonetheless you need to go see A History of Violence. David Cronenberg's direction is some of the finest of his long career, and not what you'd anticipate, the script is solidly good, and the performances - oh! Viggo Mortensen, William Hurt (whose 8 minutes put him in line for the Dame Judi Dench memorial Supporting Oscar, and don't think he might not win it), Ed Harris, the stunning Maria Bello (who'd damned well better get nommed as well, doing career work), and the real discovery, Ashton Holmes, who plays Mortensen and Bello's son and who looks like he could have a long and rich career ahead of him (character actor, not leading man, and that's no slight) - all fairly stunning. Violence is breathtaking in the truest sense (and be forewarned, it's a hard "R"; this film is graphic and intense). This is at lest on par with Crash as the year's best thus far.

Comments:
You had me until that last sentence. (I'm still gonna see it anyway)